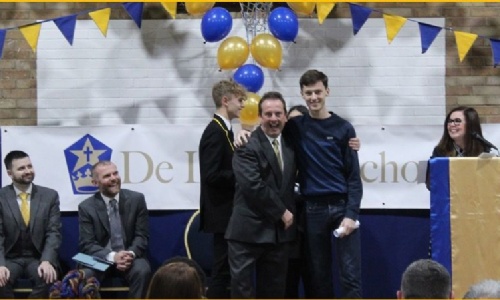 On Wednesday 21st November De La Salle held its awards evening for the academic year of 2018 – 2019. The proceedings started with the study awards.

This was only eligible for students who had been nominated as a ‘Student of the Month’ in a subject and from this group of students one was selected as ‘Student of the Year.’ It is a very impressive accolade to obtain and it was pleasing to see so many present year 11 students collect the Key Stage 4 awards.

Following on from this were the awards for student of the year selected by heads of year and the Headteacher’s students of the year. Both of these categories can only be given to students who show consistent high standards and a positive attitude to themselves and the school and this was reflected in the students who came up to collect their scrolls.

Lily and Sean  picked up the prestigious award for receiving the most ‘Students of the Month’.

The evening then had a musical interlude and the audience were treated to a rendition of ‘Let Her Go’ by Mark, and Lyam who battled through some tricky microphone placements to finish in style. This led onto the Physical Education and Music awards. Special mention must go to the Sportswoman of the Year Ellie for her invaluable contribution to the school. The        Musician of the Year was Cameron.

The latter part of the     evening started with the special awards. Mrs Carlane-Smith received the Noreen Withey Award for managing to carry out the roles of several jobs during much of last year. A deserved mention must also go to Evan who was given the Chris Keville Award for outstanding   contribution in school and within the local community. The penultimate awards were given for achievement in Key Stage 3 and these went to Lily, Albi and Samantha. Whilst the last      accolade, for key stage 4  academic achievement, was jointly shared by Mia and Paige.

This brought an end to the  evening which saw yet again a diverse and large number of winners. Our thanks goes to the Chair of   Governors, Mr. Connolly, for presenting many of the awards and a special thank you to Mrs  Donovan and  Mrs O’Connell for  organising such a memorable event.